Tashkent  is the capital and largest city of Uzbekistan, as well as the most populated city in ex-Soviet Central Asia (though the larger urban centers of Urumqi in China and Kabul in Afghanistan lie well within the geographic region of Central Asia) with a population in 2018 of 2,485,900. It is located in the north-east of the country close to the Kazakhstan border.

Tashkent was influenced by the Sogdian and Turkic cultures in its early history, before Islam in the 8th century AD. After its destruction by Genghis Khan in 1219, the city was rebuilt and profited from the Silk Road. From 18th to 19th century, the city became an independent city-state, before being re-conquered by the Khanate of Kokand. In 1865, it fell to the Russian Empire, and became the capital of Russian Turkestan. In Soviet times, Tashkent witnessed major growth and demographic changes due to forced deportations from throughout the Soviet Union.

Today, as the capital of an independent Uzbekistan, Tashkent retains a multi-ethnic population, with ethnic Uzbeks as the majority. In 2009, the city celebrated its 2,200 years of written history.

During its long history, Tashkent has had various changes in names and political and religious affiliations.

Tashkent was settled by ancient people as an oasis on the Chirchik River, near the foothills of the West Tian Shan Mountains. In ancient times, this area contained Beitian, probably the summer “capital” of the Kangju confederacy. Some scholars believe that a “Stone Tower” mentioned by Ptolemy and by other early accounts of travel on the Silk Road referred to this settlement (“Tashkent” means “stone city”). This tower is said to have marked the midway point between Europe and China. Other scholars, however, disagree with this identification, though it remains one of four most probable sites for the Stone Tower.

In pre-Islamic and early Islamic times, the town and the province were known as Chach. The Shahnameh of Ferdowsi also refers to the city as Chach.

The principality of Chach had a square citadel built around the 5th to 3rd centuries BC, some 8 kilometres (5.0 mi) south of the Syr DaryaRiver. By the 7th century AD, Chach had more than 30 towns and a network of over 50 canals, forming a trade center between the Sogdiansand Turkic nomads. The Buddhist monk Xuanzang (602/603? – 664 AD), who travelled from China to India through Central Asia, mentioned the name of the city as Zhěshí (赭時. The Chinese chronicles Book of Sui from the History of Northern Dynasties and Old Book of Tang, mention a possession called Shí 石 or Zhěshí 赭時 with a capital of the same name since the fifth century AD.

In 751, the region was conquered by Muslim Arabs.

In the mid-seventh century, the Sasanian Persian Empire collapsed as a result of the Arab Muslim conquest of Persia. Under the Samanid dynasty (819–999), whose founder Saman Khuda was a Persian Zoroastrian convert to Islam, the city came to be known as Binkath. However, the Arabs retained the old name of Chach for the surrounding region, pronouncing it ash-Shash instead. Kand, qand, kent, kad, kath, kud—all meaning a city—are derived from the Persian/Sogdian کنده kanda, meaning a town or a city. They are found in city names such as Samarkand, Yarkand, Panjakent, Khujand etc.). After the 16th century, the name evolved from Chachkand/Chashkand to Tashkand. The modern spelling of “Tashkent” reflects Russian orthography and 20th-century Soviet influence.

The city was destroyed by Genghis Khan in 1219 and lost much of its population as a result of the Mongols’ destruction of the Khwarezmid Empire in 1220. Under the Timurid and subsequent Shaybanid dynasties, the city’s population and culture gradually revived as a prominent strategic center of scholarship, commerce and trade along the Silk Road.

In 1809, Tashkent was annexed to the Khanate of Kokand.[7] At the time, Tashkent had a population of around 100,000 and was considered the richest city in Central Asia. It prospered greatly through trade with Russia but chafed under Kokand’s high taxes. The Tashkent clergy also favored the clergy of Bukhara over that of Kokand. However, before the Emir of Bukhara could capitalize on this discontent, the Russian army arrived. 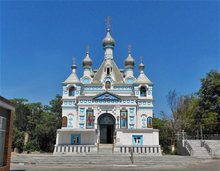 In May 1865, Mikhail Grigorevich Chernyayev (Cherniaev), acting against the direct orders of the tsar and outnumbered at least 15-1, staged a daring night attack against a city with a wall 25 kilometres (16 mi) long with 11 gates and 30,000 defenders. While a small contingent staged a diversionary attack, the main force penetrated the walls, led by a Russian Orthodox priest armed only with a crucifix. Although the defense was stiff, the Russians captured the city after two days of heavy fighting and the loss of only 25 dead as opposed to several thousand of the defenders (including Alimqul, the ruler of the Kokand Khanate). Chernyayev dubbed the “Lion of Tashkent” by city elders, staged a “hearts-and-minds” campaign to win the population over. He abolished taxes for a year, rode unarmed through the streets and bazaars meeting common people, and appointed himself “Military Governor of Tashkent”, recommending to Tsar Alexander II that the city is made an independent khanate under Russian protection.

The Tsar liberally rewarded Chernyayev and his men with medals and bonuses, but regarded the impulsive general as a “loose cannon”, and soon replaced him with General Konstantin Petrovich von Kaufman. Far from being granted independence, Tashkent became the capital of the new territory of Russian Turkistan, with Kaufman as first Governor-General. A cantonment and Russian settlement were built across the Ankhor Canal from the old city, and Russian settlers and merchants poured in. Tashkent was a center of espionage in the Great Game rivalry between Russia and the United Kingdom over Central Asia. The Turkestan Military District was established as part of the military reforms of 1874. The Trans-Caspian Railway arrived in 1889, and the railway workers who built it settled in Tashkent as well, bringing with them the seeds of Bolshevik Revolution.

Effect of the Russian revolution

With the fall of the Russian Empire, the Russian Provisional Government removed all civil restrictions based on religion and nationality, contributing to local enthusiasm for the February Revolution. The Tashkent Soviet of Soldiers’ and Workers’ Deputies was soon set up, but primarily represented Russian residents, who made up about a fifth of the Tashkent population. Muslim leaders quickly set up the Tashkent Muslim Council (Tashkand Shura-yi-Islamiya) based in the old city. On 10 March 1917, there was a parade with Russian workers marching with red flags, Russian soldiers singing La Marseillaise and thousands of local Central Asians. Following various speeches, Governor-General Aleksey Kuropatkin closed the events with words “Long Live a great free Russia”.

The First Turkestan Muslim Conference was held in Tashkent 16–20 April 1917. Like the Muslim Council, it was dominated by the Jadid, Muslim reformers. A more conservative faction emerged in Tashkent centered around the Ulema. This faction proved more successful during the local elections of July 1917. They formed an alliance with Russian conservatives, while the Soviet became more radical. The Soviet attempt to seize power in September 1917 proved unsuccessful. 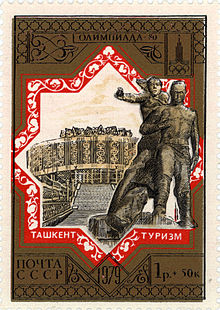 The Courage Monument in Tashkent on a 1979 Soviet stamp

Violating the Molotov–Ribbentrop Pact, Nazi Germany invaded the Soviet Union in June 1941. The government worked to relocate factories from western Russia and Ukraine to Tashkent to preserve the Soviet industrial capacity. This led to great increase in industry during World War II.

It also evacuated most of the German communist emigres to Tashkent. The Russian population increased dramatically; evacuees from the war zones increased the total population of Tashkent to well over a million. Russians and Ukrainians eventually comprised more than half of the total residents of Tashkent. Many of the former refugees stayed in Tashkent to live after the war, rather than return to former homes.

During the postwar period, the Soviet Union established numerous scientific and engineering facilities in Tashkent.

On 10 January 1966, then Indian Prime Minister Lal Bahadur Shastri and Pakistan President Ayub Khan signed a pact in Tashkent with Soviet PremierAlexei Kosygin as the mediator to resolve the terms of peace after the Indo-Pakistani War of 1965. On the next day, Shastri died suddenly, reportedly due to a heart attack. It is widely speculated that Shastri was killed by poisoning the water he drank.

Much of Tashkent’s old city was destroyed by a powerful earthquake on 26 April 1966. More than 300,000 residents were left homeless, and some 78,000 poorly engineered homes were destroyed, mainly in the densely populated areas of the old city where traditional adobe housing predominated.The Soviet republics, and some other countries such as Finland, sent “battalions of fraternal peoples” and urban planners to help rebuild devastated Tashkent.

Tashkent was rebuilt as a model Soviet city with wide streets planted with shade trees, parks, immense plazas for parades, fountains, monuments, and acres of apartment blocks. The Tashkent Metro was also built during this time. About 100,000 new homes were built by 1970, but the builders occupied many, rather than the homeless residents of Tashkent. Further development in the following years increased the size of the city with major new developments in the Chilonzor area, north-east and south-east of the city.

At the time of the collapse of the Soviet Union in 1991, Tashkent was the fourth-largest city in the USSR and a center of learning in the fields of science and engineering.

Due to the 1966 earthquake and the Soviet redevelopment, little architectural heritage has survived of Tashkent’s ancient history. Few structures mark its significance as a trading point on the historic Silk Road.

Tashkent is the capital of and the most cosmopolitan city in Uzbekistan. It was noted for its tree-lined streets, numerous fountains, and pleasant parks, at least until the tree-cutting campaigns initiated in 2009 by the local government.

Since 1991, the city has changed economically, culturally, and architecturally. New development has superseded or replaced icons of the Soviet era. The largest statue ever erected for Lenin was replaced with a globe, featuring a geographic map of Uzbekistan. Buildings from the Soviet era have been replaced with new modern buildings. The “Downtown Tashkent” district includes the 22-story NBU Bank building, an Intercontinental Hotel, the International Business Center, and the Plaza Building.

The Tashkent Business district is a special district, established for the development of small, medium and large businesses in Uzbekistan.

In 2007, Tashkent was named a “cultural capital of the Islamic world” by Moscow News, as the city has numerous historic mosques and significant Islamic sites, including the Islamic University. Tashkent holds the Samarkand Kufic Quran, one of the earliest written copies of the Quran, which has been located in the city since 1924.